I have one novel written, I, Cunningham, which I outline below. 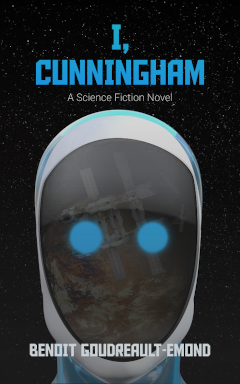 Except he didn’t die. Not really.

Instead, he wakes up stuck inside a robot. In the 29th century. Thirteen light-years from home. In a space station. Which is orbiting a planet that was meant to be a new home for the colonists. Unfortunately, everything went wrong.

He was brought back to life by accident, but the station denizens need him. Their colony is failing. Most colonists have lost hope. The AI in charge can’t do much, which is somewhat moot, since it’s out of ideas.

But Cunningham is a reluctant hero at best. He’s disoriented by his new body. He doesn’t know anything about his new environment. He doesn’t trust the station authorities. And yet, somehow, he must help them.

Or, in less than a century, no one human will remain.

Join him as he discovers his new home, his new body, and, perhaps, his new...mind?

Who should read this book?

Everyone in the world! :)

I believe readers who like exploration-driven science-fiction will enjoy my novel. There is some action, but military science-fiction this isn’t. Neither is it deeply philosophical.

There is relatively little advanced science in my works. There’s almost a zeerust quality to them. I’ve strived to avoid anything that is implausible according to current science (there are some technologies which are not known to be possible yet, but neither have they been proven to be impossible). To me, it was important that devices and concepts that do not appear possible due to obstacles that seem insurmountable, even on paper (such as faster-than-light travel, force fields, or even nanotechnology; the latter might be possible, but there’s lots of problems with parts “sticking” to one another, which do not have a clear solution right now).

There are a few assumption.

In summary, if you’re looking for a book where there’s a ton of actions and lots of crazy inventions, “I, Cunningham” is not that book, I’m afraid. It is a more slow-paced novel, patterned after the older works I’ve enjoyed over the years, such as Arthur C. Clarke’s “Songs of Distant Earth” and Asimov’s “Caves of Steel.”

A note about pricing policies

In general, my novels are 2.99 USD, or 2.99 CAD or something equivalent on various markets. So if you’re Canadian you’re saving a bit of money over Americans; rejoice!

There are, however, a couple of exceptions.

You can thus see the 51 cents as a convenience fee to avoid sideloading the book.

I will never apply DRM to any of my books. When you buy a copy, it is yours. You should be able to move it to a different device if your original device breaks, or if the marketplace you bought it from goes under (Ha, fat chance of this happening for Amazon! But it did happen for Sony and Microsoft, so...). I feel very strongly about this. But please refrain from copying the book. Lending it to somebody I’m OK with, it’s just like a paper book. I would still appreciate it if you would attempt to convince the lendee to buy the book if they liked it.